lvalues and rvalues in the C Programming Language 2¶

C++11 value categories aren’t really language features like, say, polymorphims. Rather they are semantic properties of expressions, and understanding value categories helps you in deciphering often-cryptic compiler messages. They help explain reference types, which are so essential in defining user-defined operators.

Prior to C++, C expressions were categorized as lvalue expressions and non-lvalue expressions, where lvalue meant an expression that identifies an object, a region of data storage with a defined location in memory, that may have a value and can appear on the left hand side of an assignment statement; for example,

In the expression n = 1 above, the subexpression n refers to an integer object, a specific location in memory. Therefore n is an lvalue, a storage location that can hold a value. In C an lvalue can appear on the left hand side of an assignment and can be assigned to, but in C++11 the “l” in lvalue is no longer of any real significance, and lvalues can occur in contexts outside of assignment.

Anything that is not an lvalue is termed an rvalue. So the subexpression 1 above is an rvalue.

Why are the concepts of lvalues and rvalues important? Why distinguish what is an lvalue and an rvalue?

Advantage of References over Pointers¶

References behave like pointers that are automatically dereferenced, and they are implemented using pointers. And like a dereferenced pointer *p, which yields an lvalue, a reference, too, is an lvalue expression. The real strength of references comes out in operator overloading.

Here the complex binary + operator takes a “reference to const”. This parameter will bind to both const of non-const objects. If we had written complex operator+(complex& param), then param would only bind to non-cost lvalue arguments. A “reference to const” of type T binds to both const and non-const lvalues expressions involving objects of type T, and, if an rvalue is convertible to T, param will also bind to it as shown below.

Only const references can bind to rvalues. If intref were a non-const reference to a int, then it would not bind to 3 and no temporary would be created.

resume the merging of new-lvalue-rvalue.rst into this document here.

Pre-2011 C++ followed the C model, but assigned the name rvalue to non-lvalue expressions. In the expression n = 1;, for example, 1 is an rvalue because it is not an object, not a location in memory, and thus not an lvalue. C++03 added the rule that references can bind to lvalues, but only references-to-const can bind to rvalues (in addition to binding to both const and non-const lvalue expressions). Several non-lvalue C expressions also became lvalue (<– do I mean rvalue?Listen again to Ben Saks at https://www.youtube.com/watch?v=XS2JddPq7GQ ) expressions in C++.

Distinguishing rvalues from lvalues allows the compiler to improve the efficiency of the code it generates. The compiler does not need to place rvalues in storage (although this does not apply to class instances as will be discussed).

lvalues and rvalues are relevant in contexts other than assignment. Take, for example, the binary operator +. It operands can be either rvalues or lvalues.

In C++, rvalues of class type do occupty data storage. Why? Consider this example

To get the y member of foo().y, the compiler first needs the base address of the struct S returned by foo(), and any object with an address occupies storage.

Recapping lvalues and rvalues so far

While conceptually rvalues don’t occupy storage, rvalues of class type do, and “const references to a temporary” also causes the temporary to be placed in storage. For example

in the code above, the temporary 10 is place in storage so that the const refernence to int can bind to it. Without ‘const’ the compiler issues an error.

What were previously called rvalues in C++03 are now called prvalues in C++11, and another new rvalue subcategory, xvalues or “expiring values”, was introduced. xvalues result when a lvalue is cast to an rvalue reference or when a method returns an rvalue reference. “Pure rvalues” abbreviated prvalues don’t occupy data storage. “Expiring values” abbreviated xvalues that do occupy storage.

Keep in mind that as a programmer you don’t need to worry about the distinction prvalues and xvalues. These terms exist in the C++ standard so compiler authors know what needs to be done.

The primary use of rvalue references is as functon parameters and return types. Their purpose is not primarily to allow us to delcare variables like ri above.

When a temporary is created due to binding to a const reference, it undergoes what is called a “temporary materialization conversion” that converts a prvalue into an xvalue. This places the pure rvalue, the prvalue, that is not in storage, into storage, and making it an xvalue. For example, in the code below

the compiler implicitly invokes the converting constructor string::string(const char*) to convert the character string “, ” into a string object:

The binary operator operator+(const string& lo, const string& ro) returns an rvalue. Since we can’t do something like

The main reason rvalue references are in C++11 is to provide more efficient move constructors and move assignment operator that the compiler can call whenever it detects an rvalue.

The result of s2 + s3 is an rvalue that expires at the end of the statement. Since rvalues can be moved from, the more efficient move constructor will be called.

rvalue reference parameters are considered lvalues within the body of the function.

Because the rvalue reference parameter “other” has a name, it is an lvalue within string::operator=(string&&other).

std::swap() is an good example of where we would like to force the compiler to move an object’s state instead of copying it. Take, for example,

This code invokes the copy constructors for T. But since we know that the state of a does not need to preserved, it is therefore more efficient to move its state. But to do so, we need to tell the compiler that a does not need to be preserved by casting it from an lvalue to an xvalue. This is done by calling std::move(), which converts the input parameter into an xvalue, an unamed rvalue reference. std::move() could perhaps better have been named std::rvalue() or std::xvalue().

The figure below show that the two key properties that distinguishes the value categories of C++11 are “has identity” and “move-able”: 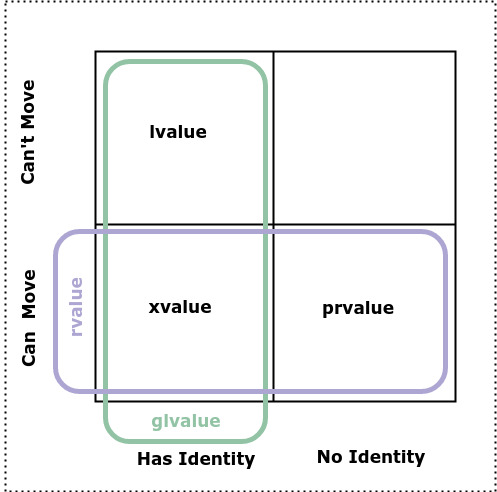 In the code example above, we haven’t moved anything yet. We’ve just created an xvalue by casting an lvalue to an unnamed rvalue reference. It can still be identified by its lvalue name; but, as an xvalue, it is now capable of being moved. But you can think of the “x” in “xvalue” as meaning “expert-only” if that helps. By casting an lvalue into an xvalue (a kind of rvalue), the value then becomes capable of being bound to an rvalue reference.

Microsoft’s Value categories, and references to them is an excellent explantion of the “has identity” and “move-able” properties that characterize and distinguish lvalues, xvalues and prvalues. The articles also contains examples of each of the value category.

Examples of lvalues, xvalues and prvalues can be found at:

Mention the important change in C++17 having to do with materialization and how this relates to value categories!!!!!

This material is from both the cppreference.com article Value Categories and CppCon 2019:Ben Saks “Back to Basics: Understanding Value Categories” and Chapter 5 of C++17 The Complete Guide by Nikolai Josuttis.